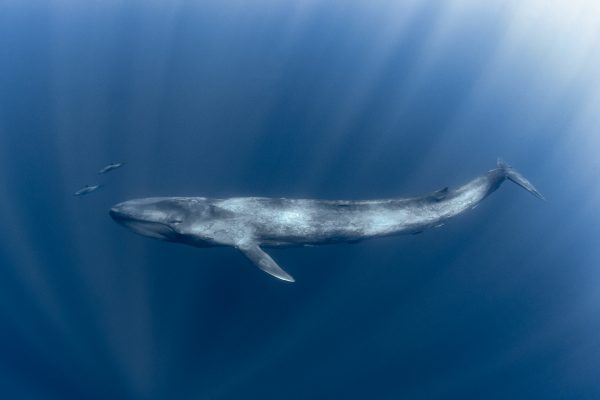 We could see dolphins jumping in the distance, a break in the infinite glassy mirror of the Indian ocean. A few minutes later we were in a “work up” of smaller bait fish driven to the surface by dolphins and other predators. I slipped into the balmy water, there were dozens of dolphins buzzing around, below in the deep I could see the form of huge Yellowfin Tuna, their golden sickle find slicing thru the depths. I was mesmerised by the spectale of giant tuna and dolphins circling in the 2000 metre deep ocean. Out of nowhere an Ocean giant appears, a Blue whale glides effortlessly past me, a pair of Spinner Dolphins riding the pressure wave created by its huge form parting the water. Time stood stil… the whale appearing and dissapearing in a moment that lasted an eternity.In reality the encounter lasted seconds, the memory of this mysterious enigma will endure a lifetime.

Spinner Dolphins ride on the bow wave of a huge Blue Whale, giving great perspective on the immense nature of our planets largest inhabitant.

The blue whale is the largest animal on the planet, weighing up to 200 tons (approximately 33 elephants).The   heart of an adult whale is the  size of a Volkswagen Beetle.The Blue Whale is the  loudest animal on Earth, even louder than a jet engine. Their low frequency whistle can be heard by other whales over 1000km away.

There are currently five “Subspecies” of blue whale, B. m. musculus in the North Atlantic and North Pacific, B. m. intermedia in the Southern Ocean, B. m. brevicauda “Pygmy blue whale” in the Indian Ocean and South Pacific Ocean, B. m. indica in the Northern Indian Ocean, and B. m. unnamed subsp. in the waters off Chile. The blue whale diet consists almost exclusively of Krill.

Once abundant in all the Worlds Oceans,  the Blue Whale was hunted  to the point of extinction until the International Whaling Commission IWC banned all hunting of blue whales in 1967. The IWC database estimates that 382,595 blue whales were caught between 1868 and 1978. Today< Global estimates the Blue Whale population at between 10,000-25,000, roughly 3-11% of the population size estimated in 1911

Join us in Tonga & Sri Lanka 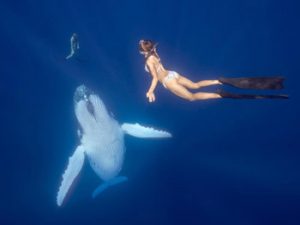